War can be an Experience of both Heaven and Hell

Many combat veterans have a love/hate relationship with their wartime experiences. They love the profound sense of purpose that their liv...

On October 16-18, 2012, I had one of my most meaningful experiences as a military ethicist.  I travelled to Ft. Campbell, KY, and conducted a series of three one-day leader-development seminars for soldiers who will be deploying to Afghanistan in the upcoming weeks.
Several months ago, COL J.P. McGee, the commander of the 1st Brigade Combat Team, 101st Airborne Division who happens to be a West Point classmate of mine, asked if I would help his soldiers (about 4,000 in his brigade) prepare ethically and psychologically for their deployment.  This is COL McGee’s eighth combat deployment to Iraq or Afghanistan over the past decade, and over the course of his experiences he has become convinced that restrained, ethical conduct in war is vitally important, for several reasons:
1. Ethical conduct provides a huge operational advantage.  Being “the good guys” in societies that lack legitimate institutions wins us public support and sets the conditions for even our enemies to reconcile and partner with us.  He points out that the Anbar Awakening/Sons of Iraq movement, in which Iraq’s tribal Sunni insurgents (not Al-Qaeda in Iraq or other inherently murderous insurgents) partnered with us in 2006-07 and began to participate peacefully in Iraqi governance, would have been impossible if we’d had a history of mistreating Sunni detainees or civilians.  Being “good” when other parties weren’t set the conditions that later allowed us to win an unexpected victory.
2. Ethical conduct protects our soldiers’ psyches/souls.  In the craziness of a combat deployment, our soldiers will do what we ask them to do; they trust their leaders. After a deployment, they will reflect on their actions.  People know right from wrong. If they have acted immorally during the deployment, they will be wracked with guilt and shame.  If their leaders led them to act immorally, they will feel used and betrayed.  If, on the other hand, they conducted themselves with honor under the stresses of combat, they will feel great pride in themselves and gratitude to their leaders.
3. Ethical conduct maintains a unit’s honor. Soldiers are entrusted to maintain their unit’s honor.  In the case of that brigade (327th Infantry Regiment), American soldiers have been fighting honorably under its colors since World War I.  The brigade’s nickname, “Bastogne,” was earned in its heroic defense of that town during WWII’s Battle of the Bulge.  COL McGee pointed out that every “Bastogne” soldier has the privilege and responsibility to live up to and to carry forward the unit’s honor.  The unit’s honor is bigger than any one soldier; it has been earned by the ethical and courageous conduct of thousands of soldiers before them over almost 100 years.  Yet, the unit’s honor can be sullied by unethical conduct by even one of its members.  He pointed out that, in his study of war crimes, three factors are almost always present: a “bad actor” with a criminal/sociopathic flaw; weak leaders supervising them; and others who had concerns but didn’t intervene.  He told his soldiers to be alert—to identify and remove morally-flawed soldiers; not to tolerate weak leaders; and to trust their guts and intervene if they see either of the first two factors.
4. Being good is good in itself.  We should always act morally and in accordance with our personal and national values, especially when they are tested by adversity.
COL McGee and I put together a 6-hour, one-day professional-development seminar, which we ran on three consecutive days for different battalions.  Each session was attended by 60-120 leaders, and about 220 leaders in all participated.
Each seminar consisted of five events, which roughly followed this timeline:
0900-1015: “A moral justification for killing in war.”  I presented my explanation on the morality of killing, which I’ve written about in this blog. For almost all the soldiers, this was the first time they’d heard the subject addressed, and it was well received.
1025-1130: “Ethics and mentoring Afghan Security Forces.” The purpose of this session was to practice ethical decision making skills, especially as they apply to advising Afghan forces.  We used the Leader Challenge Method developed by the Center for the Advancement of Leader Development & Organizational Learning (CALDOL) at West Point.  Participants were seated at tables in groups of four.  We all watched a video in which a US soldier who was partnered with ANSF describes an actual situation he faced in which one of the Afghan police on a joint patrol was acting unethically. In their small groups, the soldiers addressed three questions: “If you were in this situation, what are all the factors that you should consider?”  “What are different courses of action you could take?”  Then, after moving to different tables/groups, each answered the question, “What would you actually do?” I had one leader come forward and we role-played his course of action. We then repeated the process with another real, recent scenario on this topic.

1145-1245: COL M shared his “Thoughts on Ethics,” which included three topics: Why Ethics Matter; Ethics when dealing with local national forces; and Dealing with casualties.  He convincingly made the case that ethical conduct is absolutely essential—for the reasons cited above.  As one noncommissioned officer commented to me afterwards, “The commander has a way of making you see things different and changing your mind. He’s one smart guy.” COL McGee recognized that his leaders would have to exercise judgment in working with the Afghans, but he also clearly defined the boundaries of ANSF conduct that the BCT would not tolerate. 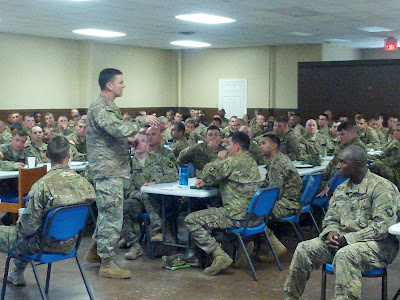 The brigade commander provides guidance on ethics to his subordinate leaders
1400-1500: “Dealing with casualties.” How a unit deals with the casualties it sustains has a large impact on its conduct.  COL McGee told his leaders to expect casualties, to be prepared to lead their soldiers through the experience, and to carry on and complete the mission our country has called on them to accomplish.  We showed a gut-wrenching video of a leader describing the day that one of his soldiers was killed, another paralyzed, and two others wounded. Then, at their tables, the participants discussed:  “What emotions should we expect to experience when one of our Soldiers is killed?” “For each emotion, what can leaders do to channel that emotion productively?” Then we showed a video of a commander describing how her unit in Afghanistan responded to a catastrophic event in which four of their own were killed by an IED.  In small groups, the leaders discussed their response to her unit’s courses of action. Many, if not most, of the soldiers in attendance have experienced casualties, so they brought their own experiences into the small-group discussions.
1515-1600: We ended the day by addressing a topic that was on everyone’s minds—the threat of green-on-blue (ANSF on US/coalition) attacks.  We showed a video of a leader in AFG describing a situation in which ANA and US soldiers raised weapons at each other. Once again, using the LC methodology, in their small groups the soldiers shared their ideas on: “If you were in this situation, what are all the factors that you should consider?”  “What are different courses of action you could take?”  Then, after moving to different tables/groups, each answered the question, “What would you actually do?”  Participants who had experienced similar situations on previous deployments had the opportunity to share their experiences with the entire group. Then, we watched a video clip on how the situation actually worked out.  A clear consensus emerged on the merits of de-escalating such situations, as well as ttps on how to accomplish that.
at October 30, 2012 3 comments: